By Wano Date 2015-10-10 14:58
Hi ! I'm coming here to show you my project, and I'm using that awesome Gosu Library with openGL. Maybe you already know bestguigui, he is the one who taught me how to combine ruby and openGL. :)

You can directly see more informations on RM.net here : http://rpgmaker.net/games/8053/ For GUI, I'm using wxruby library (awful). It's a really big project that will be commercialized ! I trully want to thanks the Gosu developer for his work and to support him as much as I can. I hope this project will encourage him to update Gosu more and more !

Let me know if you encounter any problems in Gosu! Great work. (And I'm a little jealous at how busy the RPG Maker forums are :P)

By Wano Date 2015-10-11 15:36
Thank you very much, and yep I'd tell you if I got any problem. The only thing I think is missing on your library is a multi-window support. For example, I'd like to create a laucher before running the game and I have to fiddle with killing process. Even for displaying errors, I have to run a wxruby frame.

By jlnr (dev) Date 2015-10-11 15:37
Which version of Gosu do you use? Closing and opening windows should work fine in the current version, the only limitation being that you can only .show one window at a time.

And for 1 second, I can see a kind of 2 windows fusion while the second window is created : 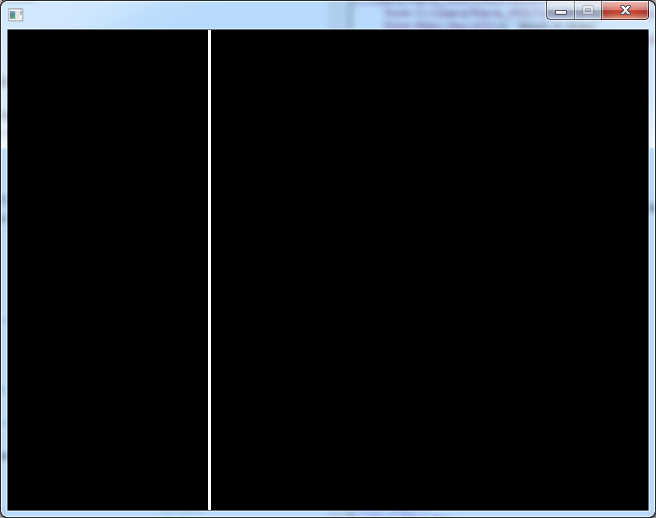 Exept this, all is working good. But maybe I'm doing that bad ?

By lol_o2 Date 2015-10-11 17:18
Use close instead of exit and show the second window only after the first one closes. Exit closes whole program.

By jlnr (dev) Date 2015-10-11 21:14
button_down is called in the main loop that Launcher#show starts. So basically the launcher window will be stuck forever in its loop, waiting for the whole main Window#show loop to finish. The call stack will be (among others) main > Launcher#show > Launcher#button_down > Window.show.
You'll have to store the launcher settings into some sort of global variables, then let the launcher close itself, and then create the new window. Something like:

Hope that helps (and works-haven't tested it)!

By Wano Date 2015-10-14 17:57
Why should I let the launcher close itself instead of close it manually ? I don't understand why you are using global variables too, what is the link between my window-fusion ?

When you create a second window and call .show on it from within button_down, you will have two nested while loops, one for each window, and the outer loop will be stuck until the inner while loop completes. So the first window never has a chance to clean up and hide itself.
The only way around this is to wait for the first call to Window#show to return (doesn't matter if you've manually called close or if the user clicks the X), and only then show the second window. So, more like:

Launcher.new.show
puts "the first window has been closed now"
GameWindow.new.show

The global variable was just an example for you could pass data between both windows. I don't know what your launcher actually does, so please ignore that bit.

By Wano Date 2015-10-25 19:30
Oh thanks that's perfectly clear now ! I did this one and this is nice working, and I'm now sure that there is not a behind window looping. I now understand why you were talking about global variables, don't worry. :)

Keep posting updates! (Is there a demo I can play with?)

First, this will be a commercial product. However, such as RPG Maker (in recent versions), there will be a script part with the main code to display your game. So you will be able to see exactly how I did.

Secondly, there will be a demo ! But you have to wait a moment for it.