By chase4926 Date 2013-03-02 01:39 Edited 2013-03-02 01:45
I'm going to preface this with the fact that this may likely never be completed.
This project is a strategy zombie themed tower defense game that I was making with a team of two others for the BPA Nationals 2013 competition.
After dropping out of both the competition and school, it seems unlikely that it will pass it's current state of development.
As such, I thought it only fair to let others mess with (and possibly take over) what we've made.

This requires Spooner's ashton gem, however it's only used aesthetically, so the "game" would run fine if the ashton bits were removed.
Even though the game isn't finished, the title screen is. And it's a pretty nice looking title screen. 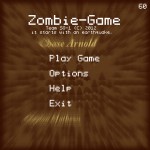